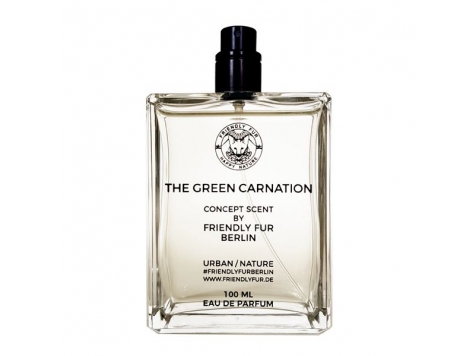 What makes a Gentleman today? What is the Essence of new Gentlemen?

Nowadays it’s not a Gender Thing anymore and the new Gentleman can either be a Man or a Woman and everything in between.

It’s the Essence that counts: Knowing the Past and focussing on the Future the new Gentlemen live in the Present.

No sticky Dogma, no blurry Morals –

coming from lived Empathy, Respect and Style, Education and Knowledge.

Swift Darkness of Smoke, Sweat and Whiskey clinging on the Tuxedo from the Night before.

T-Shirt and a white Shirt with Cufflinks: You feel the difference of your elevated State while putting it on.
The real freeze-dried Carnation Flower that I decided to bring in the Packaging might be delicate and breakable, but transports the strong and tender Emotion much better than one made of Plastic ever could” NG, Conceptionist

The Green Carnation once upon a Time was Recognition Feature and Symbol for Bohemians and Intellectuals in the 19th Century Fin-de-Siècle; an educated Group mingling in the Arts, Culture and the mundane Society around Oscar Wilde or Huismans. It also is the name of an ironic Novel written by Robert S. Hichens in 1894 reflecting this elite Circle with a Wink.

are great Values witnessing Empathy and Class as the

The shipping throughout Switzerland costs 7.- to 9.- CHF. As soon as we receive your payment for the selected items, they will be sent to you. Delivery takes up to 4 business days.

Shipping to all other countries costs up to 45.- CHF. Delivery can take up to 14 business days.

No shipping of samples outside of Switzerland!

© 2022 Süskind | designed and built by floidAgentur